Consulting Services Performed
in the Offshore Oil and Gas Sector

IMA provides market analysis, planning and investment advisory services to a wide range of clients in the offshore oil and gas sector. Our clients include oil majors, equipment manufacturers, facility fabricators, construction firms, investors and lending institutions. We have been active in this sector since the 1970s. The following illustrate our range of activities:

IMA has prepared 50 multi-client reports on the floating production market over the past 18 years. The reports, published at four month intervals, track business developments in the floater sector and forecast future requirements for new systems. They have become a standard reference document in the industry.

By the Numbers: Eye on Guyana & FPSOs 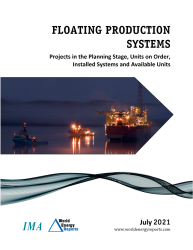 The oil and gas sector continues to rebound from the great downturn, though regional surges of Covid have been spooking the market, causing crude prices to be a bit volatile over the past two weeks. But the near-term outlook remains very positive. Crude inventory has continued to fall as oil demand rebounds and OPEC+ oil producers restrain supply. Deepwater drilling has continued to strengthen. Major…

Siemens Energy cranked up the pressure on wind turbine division Siemens Gamesa on Wednesday, saying it was "extremely annoying"…

Acteon secured an integrated project with Atlantic, Gulf & Pacific Company (AG&P) for the development of a liquefied natural…